Read more about several projects Louisville Story Program currently has in progress, including a year-long class at Central High School, a continuation of our exploration of African-American photographers, a multi-year project documenting the Russell Neighborhood, and a book highlighting the work of artist Julie Baldyga. 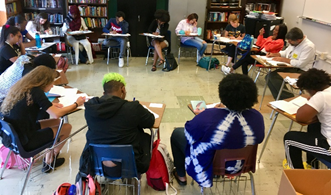 Twelve young authors from Central High School will develop and publish a compelling documentary book over the course of the 2019-2020 school year and into the subsequent summer. LSP has already partnered with Central to establish a for-credit class that we are leading during third period for the entire academic year. Authors and staff will soon decide on a focus/line of inquiry for their book, but it will certainly be distinct from prior LSP youth-authored books. Authors will conduct more research than authors of previous LSP books have done, and they will weave their findings together with personal narratives and interviews they conduct with community members.

Timeline: project currently underway and will be completed in 2022 Louisville’s historic Russell neighborhood is on the cusp of major redevelopment, with four large, ambitious initiatives already underway. At the end of the process, the neighborhood will be transformed forever.

But Russell has an extraordinarily rich history: Central High School for decades was Louisville’s only public high school for African Americans and claims a myriad of notable alumni; Old Walnut Street, which prior to being razed during Urban Renewal had the most vibrant concentration of successful black-owned businesses our community has ever seen; the Western Branch of the Louisville Free Public Library, the nation’s first public library for African Americans; several historic churches; the city’s first public pool for African Americans; tight-knit micro-neighborhoods like Beecher Terrace, Elliott Park, and Village West; the residences of historic figures such as legislator Mae Street Kidd and educator Lyman T. Johnson; and much more.

We will spend three and a half years partnering with Russell residents to document some of the many rich layers of history and culture in the neighborhood past and present. The project will culminate in at least one book but likely multiple products between now and 2022.

Outside of the Frame: Louisville’s African American Photographers In the twentieth century, there were a number of remarkably talented African American photographers working in Louisville, doing a wide range of work: photojournalism for African American newspapers like the Louisville Defender (and for the Courier-Journal after it integrated its photojournalism staff in 1968), fine art photography, portrait photography, street photography, nightclub photography, and more. Their work is significant both for what they documented—the fabric of daily life in the African American community in the West End—and for the technical excellence with which they documented it. Yet much of the work is currently sitting in basements and garages, in danger of being lost forever—if it hasn’t already been lost forever to fire, floods, or the trash bin.

This project is a multi-year, multi-book intensive effort to preserve the photographic histories of African American life in Louisville, in close collaboration with numerous African American photographers who worked in Louisville in the era of black and white film photography. We will work with these photographers to preserve and contextualize a remarkable body of work that documents places, experiences, people, and events to which many thousands of Louisvillians have a deep connection, and the photographers will share the stories of how they became interested in photography, how they learned their skills, and what it was like being a working photographer when certain opportunities were implicitly or explicitly unavailable to them. We will: (1) locate, scan, and preserve thousands of photo negatives, prints, and slides that have not yet been archived for posterity; (2) publish professional books of community history through the lens of participants’ life experiences and photography; and (3) organize significant photography exhibits.